At the recommendation of a visitor to this site (thanks, Jeffrey!), I decided to check out Google’s web-based programs (aka Google web apps) for the very first time. 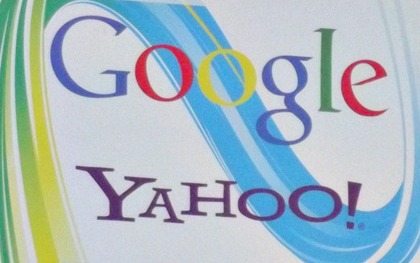 Comparing the 2 different platforms (Google & Yahoo) right off the bat, I’ve found quite a few oddities & shortcomings with regard to Google’s web apps at this point.

The first night after I started using Google’s web-based programs (Documents, Spreadsheets, Calendar, Tasks/Notes, and Gmail) went something like this…

Whenever there was a lull in the conversation with my husband, I kept repeating to Jim: “I LOVE Google. I just love Google” — because I was so excited about all the possibilities that I could envision by using Google’s web-based applications now!

Google’s got a great reputation, and I figure they have the end-user’s happiness in mind most of the time — so I was thrilled to finally make the switch and to “Googlize” most of the things I do online.

But then…. after a couple of days trying out all these web-based programs and learning about all the features, I was surprisingly disappointed by a number of details that Google seems to have overlooked at this stage in the game.

Are Google web apps the end-all-be-all that so many people claim them to be? (On first glance for me, they’re close.)

Are Yahoo’s web-based programs all that and more? (In many ways, yes — in my opinion.)

At this point, I’m not loyal to either Google or Yahoo. I’m still searching for the best way to do all my stuff online.

For the time being, here’s my $.02 about a variety of Google web apps (with my personal notes and updates over time)…

The Yahoo Web Based Apps I’ve Used Most

The primary reason I canceled my Yahoo Email account in the first place and got this ball rolling toward exploring Google web apps was because it wasn’t possible to check all of my (non-Yahoo) email accounts at one time. Doing so would’ve streamlined everything I did in terms of emailing — but it can’t happen with Yahoo.

In addition to using Yahoo Mail, I’ve also been a regular user of Yahoo Calendar on a daily basis — mostly for scheduling my To Do List for work stuff. But I’ve also used it for my personal day-to-day calendar of events to some degree as well.

However, the biggest thing that I’ve used for years now (and still like best about Yahoo web apps) is the Notepad feature  — which they recently moved into the Yahoo Calendar app. I’ve used those online notes to jot down every little thing I’d ever want to save — whether it be a random thought that crossed my mind, a non-dated item for my work or personal To Do List, or just about anything else!

Following are some of Google’s shortcomings, as I see them. (Keep in mind that I’m still fairly new at using Google’s apps, so there may be some things I just haven’t discovered yet. I’ll add to this post in time as I learn new things about Google’s programs. Look for the “updates” below.)

TIP: You can, however, color code things to create your own Google categories workaround.

TIP: Here’s how to change your Google Calendar settings.

TIP: There are, however, some other cool ways to search within the Google Calendar to find similar events in a single search.

Note: These are both accessible from Google Drive. These 2 Google web apps are almost identical to Microsoft Word and Microsoft Excel.

NOTE: This only applies when using the Firefox browser — but for some reason, in Firefox you cannot search within text boxes. At this time, the data stored within Yahoo’s Notepad appears in a text box, while Google’s does not. This saves more time than you might imagine.

Check out this funny (and informative) video about using tags in Google Docs:

In sum, there are relatively few options as far as viewing and organizing Google Docs and Google Spreadsheets goes. I’m surprised. I would’ve have thought that Google would be way ahead of the curve on this, but Yahoo Notepad wins in the web-based Notes arena — in my opinion — at this time.

MAJOR UPDATE: These days, Google Docs far exceeds my expectations when it comes to word processing, word editing, and finding a FREE program that can compare with Microsoft Word. Google Docs absolutely ROCKS! And Google Sheets is nearly identical to Microsoft Excel – -I haven’t found a single feature or a single thing that I haven’t been able to do in Google Spreadsheets yet! I’ve used Yahoo Notepad for years to save every little thing I’d ever want to use in a future article on one of our many websites. I’ve also kept many of the articles that I’d started, but still needed to research more in Notepad. It was the handiest thing in the world — since my Yahoo Notepad can be accessed from any computer.

Google Tasks is the closest thing to Yahoo Notepad. (UPDATE: Google has a new web based app called Google Keep that does what Google Tasks does — but even better.)

Since I started out with Google using Google Tasks (which are easily incorporated with Google Calendar), I decided to download a third-party app called GTasks to see if it would be a good replacement for my Yahoo Notes. (UPDATE: It definitely is! Here’s my review of GTasks and how I use it daily to this day — on both my phone and my laptop.)

While Google’s Personal Homepage is a pretty neat feature — especially since you can store things in different “tabs” (it’s like a browser within a browser) — I just don’t need it.

So I use Google’s Internet start-up page more as a place to store To Do Lists for both Jim and I. We’re not talking shopping lists here, but rather work stuff and website stuff. In case you haven’t already noticed, we are up to our eyeballs with websites right now — most of them we write and maintain on a regular basis. Not to mention all our hopes & dreams for future stuff that we plan to delve into — so our To Do Lists are definitely quite hefty. (Not that we’re complaining, mind you… we feel quite fortunate to be able to pursue what we’re most passionate about at this point in our life. But do you know of anyone who wants to write for some of our 32 niche websites?)

A free program called Stickies Post-It Notes makes it easy to change and modify the To-Do Lists you store on Google’s Personal Homepage in “real-time”. It’s good, and simple to use.

The only other modification I’ve made on Google’s Personal Homepage is to add my Google Calendar there. It’s not just having the calendar there that I like, but the fact that you can display your “agenda” (upcoming events for the week) in a pretty cool list. This can appear below the calendar itself, or you could turn off the big calendar grid & just show your scheduled events instead. That’s a pretty handy for at-a-glance details without having to keep your full-page calendar open at all times.

Overall, I’d give Google’s Personal Homepage a big thumbs-up. If I wanted or needed one place to read everything that’s interesting to me on the web, then this would be the place to organize it all. But in my world, I simply haven’t got the time for leisurely reading — everything for me is task-based at this point instead.

Please remember that I’m using these Google web apps for the very first time here. I’m definitely not an expert on Google’s programs, and I welcome your expertise if you happen to have more experience than I at using any of these Google web based applications.

As far as Google web apps are concerned, I’m certain that I haven’t discovered the best ways to do things yet — so I’ll continue to post updates here as I find and learn new things about them.

At this point, I’d summarize my comparison of Google & Yahoo web apps by saying:

At this point, I’m going to try to use Google web apps exclusively. I’m willing to adapt to what I’m sure will become the most popular web-based applications (eventually) — but I’ve still got a lot to learn. I welcome any tips & suggestions from others who use Google’s web-based programs and Google web apps.

MAJOR UPDATE: As it turns out, Yahoo has pretty much stayed stagnant since I first wrote this article. On the other hand, Google web apps have continually been improved upon through the years. Most, if not all of the “negatives” that I attributed to Google web apps above have been significantly improved, and I now I use Google apps exclusively! My online life is now organized, manageable, and easy using these Google web-based programs.

Got A New Computer?… Try These FREE Programs & FUN Shortcuts

Firefox Tip: How To Remove Typos And Other Text From The ‘Saved Forms’ Boxes