Google Rewards App: Yes, You Can Get Paid To Answer Easy Surveys On Your Android Phone I immediately did a quick search in the Google Play Store for an app called Google Rewards and found this:

So, you earn monetary credits in the Google Play Store for every brief survey that you answer.

I signed up about 4 months ago. Now I have $24.99 in Google Play credits that I can use on anything in the Google Play Store!

I’ve found that each survey takes less than 1 minute to complete.

How Much Do You Get Paid… Exactly?

The most common reply after completing a survey is:

Thanks! 25 cents has been credited to your Google Play account.

That’s typically the payout for answering 1- or 2-question surveys that are super simple: 25 cents.

Sometimes, if there are 3 or more questions, the payout is higher — anywhere from 50 cents to $1.00, in my experience.

Even for those (rare) longer surveys, the questions are so simple that you can complete the entire survey in less than 2 minutes. 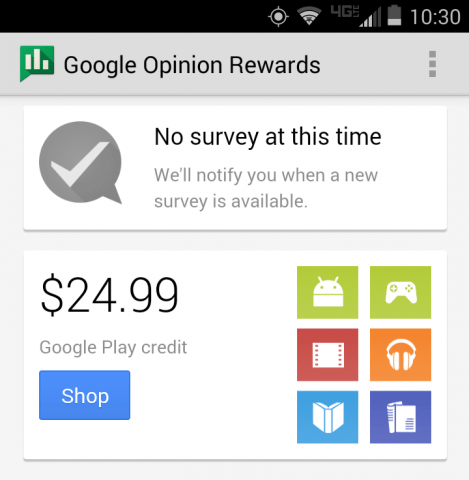 These are some of the Google Rewards survey questions I’ve received:

The questions almost always lend themselves to a single Yes or No response.

Sometimes, there will be a second question something like this, “…If yes, which one?”

They say that you will receive a survey about once a week, on average.

I find that I’m receiving surveys at least 2 a week — sometimes more. (Which is a good thing… more Google Play credits!)

TIP: If you keep your “location history” turned ON on your Android phone, then you’ll get even more surveys. Those are basically about the places you’ve visited recently.

More Reasons This Is A Fun App

I like the fact that you don’t have to go anywhere to see if surveys are available to you — you simply receive a drop-down notification on your Android phone.

I can’t say enough about this awesome app.

Rarely do you get an immediate and tangible reward for using an app. This one is fun… and profitable.

Personally, I use my Google Play credits mostly to buy music and movies.

And, while I typically only use FREE apps on my smartphone, it’s nice to know if there’s ever one that I want to purchase then it will be FREE for me now! I also like to use my Google Play credits to buy the pro (ad-free) version of a FREE app that I’ve been using for ages. If you need a second opinion on this cool app that sounds too good to be true, check out finance guru Clark Howard’s article: The Way To Get Paid For Surveys That Isn’t A Scam.

Kindle Self Publishing Tips: How To Publish Your Book On The Kindle Reader